The Florida State soccer team is once again joining forces with Tallahassee Memorial HealthCare for the annual “Paint it Pink” campaign. During the 2022-23 seasons, each of Florida State’s 10 women’s sports will take part in a “Pink” event of some kind. Teams will don such items such as pink shoelaces, swim caps, and jerseys during their respective “Pink” games. Proceeds from each "Pink" game will be donated to the Tallahassee Memorial Health Care Walker Breast Center.

The Seminoles are coming off a week in which they went 1-1 on the road, earning a 1-0 win over No. 2 Virginia on Thursday before losing 4-0 to No. 17 Notre Dame on Sunday.

Since 2012, Florida State has out-scored the Blue Devils 16-7 with eight of their nine wins coming by way of a shutout.

The last time these two teams met was last season. Duke won 1-0, scoring the game’s only goal in the 27th minute by Tess Boade. Mia Justus played all 90 minutes recording one save for FSU.

ROQUE IS DOMINANT IN GOAL

In just over two seasons as Florida State’s starting goalkeeper, Cristina Roque is a combined 32-0-8 and has started in two National Championship games.

She recorded a career-high 10 saves in a shutout win over No. 2 Virginia, earning her ACC co-defensive Player of the Week Honors.

Roque is the NCAA’s active leader in Goals Against Average. 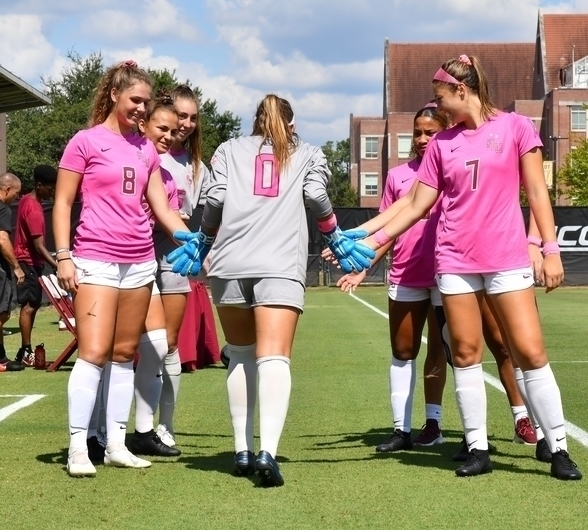 Still difficult for me to digest that the Lady Noles are 5th in the ACC in RPI.

NoleLizards said:
Still difficult for me to digest that the Lady Noles are 5th in the ACC in RPI.
Click to expand...

Nighswonger is maddening...................amazing cross and shot and then taking a bad angle and making a poor pass. You never know what you are going to get with her.

fsufool said:
Nighswonger is maddening...................amazing cross and shot and then taking a bad angle and making a poor pass. You never know what you are going to get with her.
Click to expand...

Getting Payne back is yuge. Need all hands on deck at this point of the season.
You must log in or register to reply here.