Reigning FedExCup champion Patrick Cantlay leads the field in Detroit as the PGA TOUR inches closer to crowning the champion of this season’s FedExCup.
FIELD NOTES: Cantlay, who’s ranked fourth in the world, is the highest-ranked player teeing it up at the Rocket Mortgage Classic… Rookie of the Year frontrunner Cameron Young, who’s 13th in the FedExCup, returns to action after his runner-up at The Open… Young, Will Zalatoris, and Sahith Theegala are all up-and-coming stars in the field who have been knocking on the door as they seek their first PGA TOUR victory… Other notables heading to Detroit include Tony Finau, Max Homa, Kevin Kisner, and Harris English… Rickie Fowler will be teeing it up and needs a good finish to lock up a spot in the FedExCup Playoffs. He entered the 3M Open, where he made the cut, ranked 129th in the FedExCup standings… Among the sponsor exemptions are Wesley Bryan and Geoff Ogilvy, the former U.S. Open champ who recently made his first TOUR start since 2018… Haskins Award winner Chris Gotterup, this year’s collegiate player of the year, makes his seventh TOUR start since turning pro, which includes a T4 at the John Deere Classic… Cole Hammer tees it up on TOUR for the second time since turning pro, and amateur Michael Thorbjornsen is back on TOUR for the first time since finishing fourth at the Travelers Championship. All three of the young stars are also in the field via sponsor exemptions… Stephan Jaeger, No.125 on the FedExCup standings entering the 3M Open, is teeing it up in Detroit and looking for a solid finish to cement his Playoffs position… Eleven major champions are in the field.

FEDEXCUP: Winner receives 500 FedExCup points.
COURSE: Detroit Golf Club (North course), par 72, 7,370 yards (yardage subject to change). This club, which is more than a century old, was updated for the TOUR’s initial arrival in 2019. The back nine has proven to be drama-filled. Cam Davis made an eagle and a birdie on his final two holes to get into a playoff with Joaquin Niemann and Troy Merritt last year, which Davis went on to win.
STORYLINES: The Rocket Mortgage Classic is the penultimate event of the Regular Season. Georgia product Greyson Sigg is on the outside looking in at No. 126 in the FedExCup standings entering the 3M Open, six points back of Stephen Jaeger. TOUR winners Jason Day and Nick Taylor are amongst the guys on the bubble along with Kramer Hickok at No. 124 and Puerto Rico Open winner Ryan Brehm at No. 121. The TOUR will head to the Wyndham Championship for the season finale next week… Cameron Young appears to be due for a win. He has four second-place results this season and is looking for a big breakthrough this week in Detroit. Two of the three winners at the Rocket Mortgage were first-time TOUR champions… Both of those winners, Nate Lashley and Cam Davis, are back in action in Detroit.
72-HOLE RECORD: 263, Nate Lashley (2019)
18-HOLE RECORD: 63, Nate Lashley (2019, first round), J.T. Poston (2019, second round), Davis Thompson (2021, first round)
LAST TIME: Cam Davis won for the first time on the PGA TOUR and he did it in dramatic fashion – defeating Troy Merritt on the fifth hole of a playoff. Davis shot a final-round 67 and finished at 18 under for the week alongside Merritt and Joaquin Niemann. Niemann – who had a chance to win in regulation but couldn’t get his final-hole birdie to fall - dropped out of the playoff after making bogey on the first extra hole. Davis couldn’t convert any potential tournament-winning putts (he had opportunities on each of the playoff holes) but won the championship after Merritt bogeyed the fifth extra hole. Davis sprinted to the finish Sunday in Detroit, holing a 50-foot eagle from the sand on the 17th hole Sunday and adding a birdie on the par-4 18th. The week prior to the five-hole playoff at the Rocket Mortgage the TOUR had an eight-hole playoff at the Travelers Championship. Hank Lebioda and Alex Noren, who shot an 8-under 64 Sunday for the round of the day, finished tied for fourth. 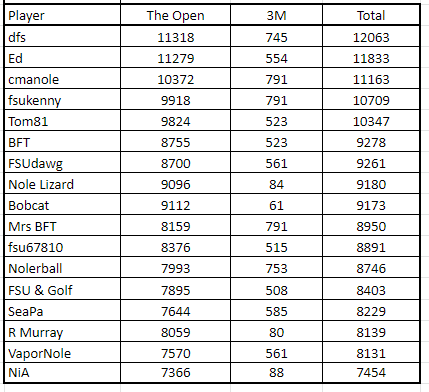 Out of town so before I forget
Cantlay
McNealy
Cam Young
Zalatoris
Reactions: Nolerball, Bill From Tampa, NoleinATL and 1 other person

Pulling for Morgan but not picking him. Ricky same. Keegan as well.
Reactions: Nolerball, NoleinATL and NoleLizards

And the wait its been such a long, long time
For him to get across the finish line
He's not the man they think can't get it done
Oh, no, no, no
He's a rocket man
Rocket man, burning off the edge of every hole...
Reactions: Bill From Tampa, seminoleed, NoleinATL and 2 others
S

This reminds me I have to go back to the ATL in September, as I have tickets for Elton's
concert then.
Reactions: cmanole, NoleLizards and NoleinATL
B

And the wait its been such a long, long time
For him to get across the finish line
He's not the man they think can't get it done
Oh, no, no, no
He's a rocket man
Rocket man, burning off the edge of every hole...
Click to expand...

I assume that is in the key of B flat just like the original right?
Reactions: cmanole, NoleinATL, Nolerball and 1 other person
F

Bill From Tampa said:
I assume that is in the key of B flat just like the original right?
Click to expand...

Brother, everything is flat the way I sing...
Reactions: cmanole, seminoleed, Bill From Tampa and 2 others
S

Nolerball said:
Brother, everything is flat the way I sing...
Click to expand...

I'm with you there, Noler. I tried singing in the shower once and the water stopped running.
Reactions: cmanole, Nolerball, Bill From Tampa and 2 others

If I picked him at the turn, he wouldn't have broken 80 for the round
Reactions: cmanole and NoleinATL
S

Call me crazy, but if I'm going to catch DFS, I need to pick some long shots to score big. Here goes nothing:

seminoleed said:
I'm with you there, Noler. I tried singing in the shower once and the water stopped running.
Click to expand...

Today at 3:00 PMNew
My picks for the Rocket Mortgage:
1. Cantlay
2. Zalatoris
3. Lebioda
4. Scott
Good luck to all. I may get to speak again next week depending on venue of our game !
Reactions: cmanole, seminoleed and NoleLizards

@Bill From Tampa ( for the Mrs) and @fsu67810 reminder to get in your picks for Rickie's tournament
Reactions: cmanole and fsu67810

As of August 1st ( Monday), there is apparently going to be a change with Warchant going to
On3 Warchant. On3 has the exact same forums and the news release says a legendary FSU website is coming. The current price to sign up is 1 dollar for 12 months, then goes back to Rivals pricing after the next 12 months, or 4 months if you pay month to month.


I am posting this to say I dont know what will happen to the Rivals FSU ( specifically PGSF) board on Monday so if I post our new thread I am not sure we will be able to see it on Monday.

I a going to post this a couple of times over the next few days so hopefully everyone will see the post. My email address is
username at gmail.com If the thread is not visible Monday, email me and I will let you know if we have a new spot. I know not everyone is a paying member so hopefully one of the sites will have a free board we can infiltrate.
Last edited: Jul 27, 2022
Reactions: cmanole, FSUdawg, fsu67810 and 1 other person

After much badgering to get them to me, here are Mrs BFT's picks.

How did you KNOW?? Did you find a psychic in Cape Coral or something?
Reactions: cmanole, fsu67810, seminoleed and 1 other person

NoleLizards said:
How did you KNOW?? Did you find a psychic in Cape Coral or something?
Click to expand...

I sure didn't think Finau would come out blazing after the win last week
Reactions: cmanole and NoleLizards

NoleinATL said:
One of the sites I go to had him as a top sleeper pick this week

I sure didn't think Finau would come out blazing after the win last week
Click to expand...

Doubt Finau will keep it up. It'll be windy tomorrow afternoon, and he never plays well when I pick him.

...And oh, Cameron Champ fell flat on his face defending the 3M last week, but he's off to a great start today.
Reactions: cmanole and NoleinATL

The guy hated his shot..lol

NoleinATL said:
One of the sites I go to had him as a top sleeper pick this week

I sure didn't think Finau would come out blazing after the win last week
Click to expand...

Exactly. I try to visit a number of different sites each week looking for tips, sleepers, anything that catches my eye. Which this one did.

But let's see him keep it up. After all, a sleeper isn't usually someone you've ever heard of before.
Reactions: cmanole, NoleinATL and NoleLizards

When I finally picked him last week, Sahith Theegala inhaled briskly through puckered lips. Of course he's now leading this particular tournament and is five under at the turn today.
Reactions: cmanole, FSUdawg, seminoleed and 1 other person

We have a Charlie Hoffman sighting, glad to see him back near the top of a leaderboard
Reactions: cmanole, Bill From Tampa and NoleLizards

@cmanole working on his swing, got to admire the dedication

NoleLizards said:
When I finally picked him last week, Sahith Theegala inhaled briskly through puckered lips. Of course he's now leading this particular tournament and is five under at the turn today.
Click to expand...

I had him last week as well, so I feel your pain.
Reactions: cmanole, NoleinATL and NoleLizards

Finau and Pendrith stay hot have a decent lead going to the weekend
Reactions: cmanole and NoleLizards
You must log in or register to reply here.