The FedExCup Playoffs begin this week with the FedEx St. Jude Championship outside Memphis, a city that’s held a PGA TOUR event every year since 1958.
Tony Finau looks to defend his title from last season’s FedExCup opener after recently winning back-to-back titles on TOUR.
FIELD NOTES: The top 125 in the FedExCup standings are set to tee it up at TPC Southwind and return to action on TOUR… Count Cameron Smith as one of those who plays for the first time since winning The Open at St. Andrews. The Claret Jug winner lost in a playoff to Finau a year ago at the event played at Liberty National Golf Club, and also was T5 last year in the World Golf Championship at TPC Southwind… Scottie Scheffler, thanks to his four victories earlier in the year, heads into the FedExCup Playoffs first in the FedExCup Points List and as the winner of the Comcast Business TOUR TOP 10… Last season’s FedExCup Champion Patrick Cantlay travels to Memphis ranked fifth in the standings thanks to a TOUR-high 10 top-10s and a win with Xander Schauffele in the Zurich Classic of New Orleans. Cantlay is seeking to become the first back-to-back FedExCup champ… TOUR rookie Cameron Young sits ninth in the FedExCup standings after an incredibly impressive maiden TOUR campaign that features seven top-3 finishes, including a runner-up at The Open and T3 at the PGA Championship… Hideki Matsuyama and Sam Burns, who lost in a playoff at last year’s WGC-FedEx St. Jude Invitational played at TPC Southwind, are back looking for some more magic in Memphis. Burns and Matsuyama are Nos. 3 and 10, respectively, on the FedExCup standings. Burns has three wins this season while Matsuyama has two… Keep an eye on Daniel Berger this week. Berger, who is projected 79th in the FedExCup standings, loves TPC Southwind. He won there in both 2016 and 2017 and finished T2 in 2019 and T5 last season, when the event was elevated to a World Golf Championship… Justin Thomas, who is eighth in the FedExCup standings after winning his second PGA Championship, is another recent TPC Southwind winner (2020) who is set make his return to action… The 125 golfers who are eligible for the FedExCup Playoffs’ first event will be determined after the final round of the Wyndham Championship on Sunday…Rory McIlroy, who’s seeking to become the first three-time FedExCup champ, is playing for the first time since a heartbreaking final round at The Open. He ranks sixth in the FedExCup.
FEDEXCUP: Winner receives 2,000 FedExCup points.
COURSE: TPC Southwind, par 70, 7,243 yards. The Ron Prichard design was established in 1988, with Hubert Green and Fuzzy Zoeller as player consultants. This is the first time TPC Southwind has hosted a FedExCup Playoffs event. The course boasts Bermuda greens, plenty of streams, ponds, and lakes, plus undulating zoysia fairways. During last season’s WGC-FedEx St. Jude Invitational, the course played to an average score of nearly 1-under, at 69.05.
STORYLINES: The FedEx St. Jude Championship is the first of three FedExCup Playoff events… Only the top 70 in the FedExCup standings after the FedEx St. Jude Championship will be continue to the BMW Championship… No golfer has ever won the FedExCup in back-to-back years. Last season’s winner, Patrick Cantlay, is in a solid position heading into Memphis at No. 5. Rory McIlroy and Tiger Woods are the only two-time FedExCup winners… The winner of the FedExCup will earn $18 million… How about Tony Finau’s summertime sizzle? Finau, who is looking to become the first person to successfully defend his title at the FedExCup Playoffs opener, comes into the FedExCup playoffs having won the 3M Open and the Rocket Mortgage Classic in back-to-back weeks. He was the first golfer on TOUR to win two weeks in a row since Brendon Todd in 2019.
72-HOLE RECORD: 254, Dustin Johnson (2020 – TPC Boston)
TPC SOUTHWIND RECORD: 264, Brooks Koepka (2019), Abraham Ancer (2021), Hideki Matsuyama (2021), Sam Burns (2021).
18-HOLE RECORD: 60, Dustin Johnson (Second round, 2020 – TPC Boston)
TPC SOUTHWIND RECORD: 61, Tom Lewis (Third round, 2020), Bob Estes (First round, 2001), Jay Delsing (Fourth round, 1993).
LAST TIME: Tony Finau busted out of a five-year winless drought to capture last season’s FedExCup Playoffs opener in extra holes over Cameron Smith. Finau went on a 5-under run through Nos. 12-16 on the back nine Sunday to climb the leaderboard. He nailed a testy 6-footer for par on the 72nd hole to get it to 20-under for the week. Smith made back-to-back birdies on 12 and 13 and again on 16 and 17 but couldn’t convert a 20-footer for birdie on the par-4 18th. Smith and Finau played just one extra hole, as Smith’s drive was so wild it went over the retaining wall that separates Liberty National from the Hudson River. Finau made an easy-does-it par, and the trophy was his. Jon Rahm, the 54-hole leader, finished third at 18 under. He was firmly in the mix late on Sunday but bogeyed Nos. 15 and 18 to fall out of contention. Alex Noren, Tom Hoge, and Justin Thomas rounded out the top five.

Keith Mitchell had a clutch finish as he looked to earn his way into the second playoff event. At No. 101 in the FedExCup standings, he birdied his final three holes in the final round to get into a tie for eighth and moved into 63rd position.

@DFSNOLE is still the leader as we head to Memphis 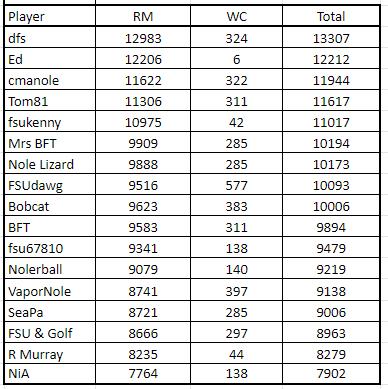 I hope you are enjoying the move to FL. We are hopefully only a couple years behind you...once the daughter graduates from HS.
Reactions: cmanole, seminoleed and NoleinATL

Here's the link for the field:

I hope you are enjoying the move to FL. We are hopefully only a couple years behind you...once the daughter graduates from HS.
Click to expand...

Oh, we are, believe me! Seafood and rum every day, nothing to keep a watch on for, it's all good--except getting reacquainted with the heat. I grew up in Tampa, but nearly 50 years in Atlanta softened me up for what it's like down here. But that's a minor complaint.
Reactions: cmanole, fsukenny and NoleinATL

seminoleed said:
Oh, we are, believe me! Seafood and rum every day, nothing to keep a watch on for, it's all good--except getting reacquainted with the heat. I grew up in Tampa, but nearly 50 years in Atlanta softened me up for what it's like down here. But that's a minor complaint.
Click to expand...

We are the lightning capital of the world ! Hey we have an office in Lutz if you want to grab an FSU prognosticating lunch.
Reactions: cmanole, NoleinATL and seminoleed
S

That's not too far from here, maybe 2.5 hours. I might just do that soon.
Reactions: cmanole and NoleinATL

Reactions: cmanole, Nolerball, Bill From Tampa and 1 other person
B

The PGA is going to have to give in at some point and allow players to participate on both tours.
Reactions: cmanole, seminoleed and NoleinATL
T

Now that I'm closer to 3rd than I am to 1st, time to throw caution to the winds:

some interesting stuff coming out of the LIV v PGA court case, the most interesting is that tournament winnings are counted against the sign-on deal.

Damn, now possibly Cam Young, the two Cam's hurt the tour in terms of young talent, still plenty of talent, but those two are rising stars

Reminder to get in your picks for tomorrow, only 2 tournaments to go before end of regular season
Reactions: NoleLizards

Some long shots out early with low scores
Reactions: cmanole and NoleLizards

Looks as though Marc Leishman is looking to go out with a bang
Reactions: cmanole and NoleinATL

Si Woo Kim has made a miraculous recovery since his final round WD on Sunday. Of course.
Reactions: seminoleed, Bill From Tampa, NoleLizards and 1 other person

NoleinATL said:
some interesting stuff coming out of the LIV v PGA court case, the most interesting is that tournament winnings are counted against the sign-on deal.

Scottie doesnt seem to be having fun

((((Siggggh)))). Rory's back to his old poor first round play ways. 🙄
Reactions: Bill From Tampa
You must log in or register to reply here.